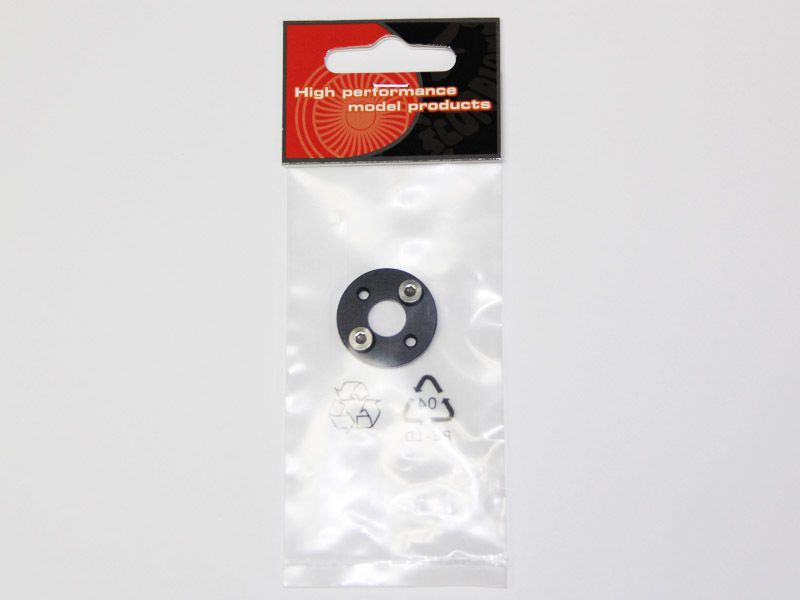 Skip to the beginning of the images gallery
Details
The HK-22mm motor plate adapter was developed for use in the Blade 400 and 450 size electric helicopters. When a Scorpion HK-22mm series motor is used in a Blade helicopter, there are two common issues. First because of the orientation of the motor screw holes in the mount, the motor leads get rotated 90 degrees so they come out sideways in the motor frame. Second, because the auto-rotation gear is so large and so close to the main gear on these Blade series helicopters, the top of the pinion gear can interfere with the auto-rotation gear.

The new Scorpion HK-22mm Motor Adapter Plate addresses both of these issues. When the adapter is installed to the mounting holes of the motor with the included screws, the mounting hole pattern for the motor is rotated 90 degrees to get it back in the orientation that works for the Blade 400 and 450 helicopters. Because the adapter is 3mm thick, it also raises the motor up 3mm so that the pinion gear is clear of the auto-rotation gear.

In addition to the Blade 400 and 450 series helicopters, this part will work with any smaller helicopter that uses an HK-22mm series motor, that has 16mm spacing between the mounting screw holes, and would benefit from having the motor be rotated 90 degrees from it's current location.

Included in the kit is a black electro-coated, machined aluminum plate with two M3 countersunk holes and two M3 threaded holes along with two M3 x 6mm flat head screws to mount the adapter plate to the motor as shown below.

Please Note: When the mounting adapter is used, it is important the make sure that the screws used to attach the adapter plate to the helicopters motor mount are of the correct length. The screws used need to go through the motor mount and extend past the mount 2.5 to 3.0mm. If the screw sticks through more than 3mm, it will bottom out against the motor case and not tighten down properly. If the screw sticks through less than 2.5mm, you will not be able to grab enough thread in the adapter plate, and the screws could strip out the threads in the adapter plate. If the screw is just a little too long, then a washer can be put under the screw head to take up the excess length.
Reviews
Write Your Own Review
Only registered users can write reviews. Please Sign in or create an account